As a HubSpot Certified Agency Partner we frequently write guest blog posts that are published on the HubSpot blog. This post originally appeared on The HubSpot Insiders blog, a section of the Inbound Hub.

Unless you are a red carpet celebrity or a mega brand, creating a Twitter profile is certainly not a case of “build it and they will come”. Organically attracting a large following on social media tends to be a bit of a slow burn.

There has been a lot of talk lately within the startup marketing community about “Growth Hacking”. As Twitter Product Manager Paul Rosania describes it, the job of a growth hacker is to try “a lot of ideas, ruthlessly optimizing successes and quickly discarding dead ends.” There is no one thing they do to achieve growth.

The “growth hacker” mindset is very applicable to inbound marketing.  There are a number of growth-hacking tactics that can help to supplement the organic growth of your Twitter following with periods of accelerated, yet targeted growth.

The tips and tricks outlined in this post will not only help you accelerate the growth of your Twitter following, but help you identify the Twitter users that matter the most for your business.

One of the lesser-known features of Twitter is the ability to add people to “lists”. Lists are essentially a way to curate targeted groups of Twitter users. Apart from the ability to distill a relevant stream of Twitter conversations, adding people to lists is an effective way to grow your Twitter following.

If you have ever been added to a Twitter list you may recall receiving a push notification or email: 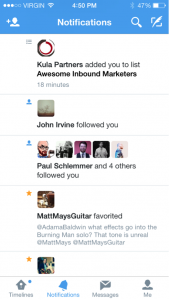 You can think of these notifications as a nice soft touch point that lets people know that you are interested in what they have to say and that you might have content that speaks to their interests.

Adding people to lists one-by-one is tedious. To make this strategy scalable you will need to use a Twitter list building application. There are a number of startups building applications that allow you to search for users based on bio keywords, location and minimum / maximum follower count.

Twitter allows you to create up to 50 lists, containing a maximum of 5000 users per list. While this technique is still a relatively new strategy, marketers have reported conversion rates of 0.5-1%. That means if you execute the strategy well, you could easily attract hundreds, if not thousands of targeted followers.

While this technique almost seems too simple to mention, sometimes it is the simple techniques that prove most successful.

For instance, if you sell water ski and wakeboard gear your buyers likely follow other similar Twitter accounts. These might include the Twitter accounts of your direct competitors, powerboat manufactures, popular athletes or extreme sports lifestyle brands.

If your competitors have built a following on social media there is a good chance those same followers might be interested in following you as well. 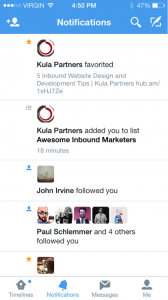 Growth hacking tactics tend to stir up debate over quality vs. quantity, automation vs. personalization, engagement vs. self-promotion. The bottom line is that you need focus on highly targeted and strategic actions rather than using these tactics in a spammy way. Automation can help, but you need to keep a close eye on quality control.

Some of the growth hacking tactics we have suggested involved binging and purging followers. For instance, if you create a targeted Twitter list you may want to try and follow all of the people on the list with the hope of receiving a follow back. The same applies to the harvesting your competitors’ followers, some people will follow you back but a large percentage won’t.

Twitter allows you to follow up to 1000 people a day as long as you stay within a 2:1 ratio of following-to-followers. If you are aggressive with these tactics, which you should be, your ratio can get a little out of sync.

Community management tools like ManageFlitter, JustUnfollow and Unfollowers are very helpful in identifying which accounts have followed you back, who is not following you and managing your following-to-followers ratio.

While the debate about the definition of “growth hacking” is far from over, I think Paul Rosania’s explanation of the growth hacker mentality is bang on – Try a lot of ideas, ruthlessly optimize success and quickly discard dead ends.

Just like any other strategy, the 6 tips and tricks we have provided may not work for every business but you won’t know what works best for you and what doesn’t work until you give it a try.

As always, I would love to hear your feedback about these tactics in the comments section below!