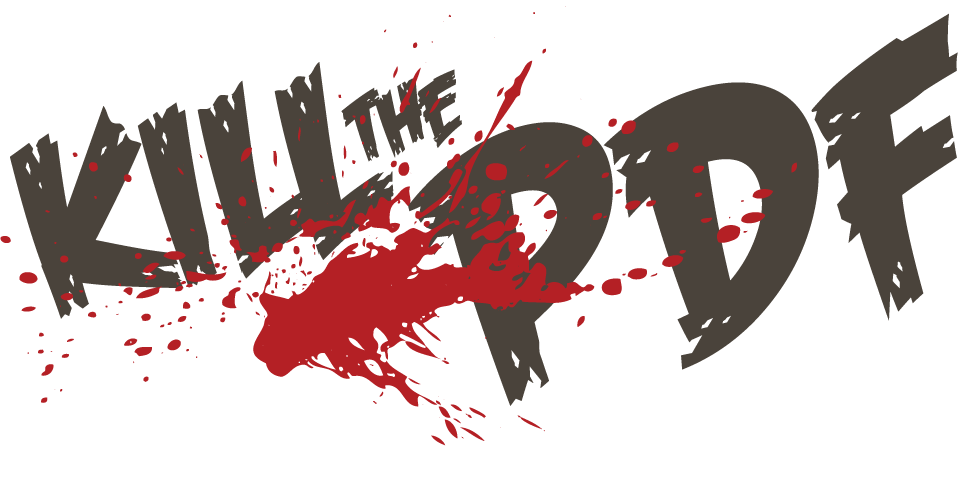 It used to be so easy. Marketers would work closely with a designer to lovingly produce whitepaper top of funnel documents, full of great images, typography and brand-appropriate color palettes—making it perfect for printing. Once the design was approved, the PDF document would be exported and connected to an inbound marketing workflow. There’s only one problem: many of the prospects downloading your PDF aren’t doing so with any intention of printing it. Plus, a serious chunk of those prospects are looking at the document on a mobile device instead of the big laptop screen for which it was intended, meaning they have to spend the whole time pinching and scrolling to try to read the content. It’s time to move beyond a format rooted in print technology for our most premium online inbound marketing content offers and deliver them instead as interactive web pages.

It’s time to kill the PDF.

A brief history of the Portable Document Format

Before we get into why it’s time to ditch this venerable file format, we should look at how we got here. There was a time when PDF files were the domain of print designers and art departments everywhere. Originally released in 1991 by Adobe, the format was created to include elements of the company’s PostScript language along with font embedding and compressed imagery. Adobe Acrobat, the first tool for creating PDF files, was released in 1993. At the time, the software for creating PDFs was expensive, and even Adobe Acrobat Reader cost $50. Although Adobe released the format as an open standard, it took five years before it became reliable enough to be used regularly by designers for prepress work. Over the next decade, Adobe continued to make improvements to PDF’s featureset and reliability until it actually became an ISO standard in 2008. At this point, PDF viewers were included with most desktop computers, and elements of PDF are even a native part of the MacOS graphics software that runs behind the scenes. All that to say, the PDF platform is well established, refined, and relatively stable.

What’s good about the PDF? 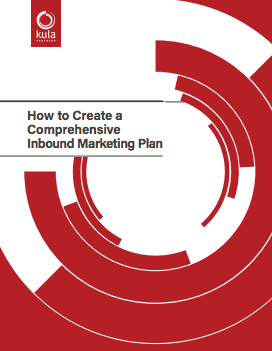 Given the proliferation of the PDF, we should look into why the format became the defacto standard for pre-formatted document sharing online. The biggest benefit of PDF is that it preserves all formatting, since the fonts are embedded into the document, and the other layout elements do not change, no matter where it’s being viewed (this is also one of the biggest problems, but more on that later). PDF files are easy to email, as long as the file size isn’t too large—although it is possible to compress any images using JPG or LZW compression.

PDF files are often easily printed, especially since most are designed primarily for this purpose. The letter format in North America or A4 in Europe aligns well with standard printers and ensures that an organization’s brand can look as good on paper as it does on a larger screen. Combining these features with the ubiquity of PDF reader apps on most platforms ensures that just about anyone can open a PDF.

One of the best features of a PDF is the ability to easily add internal links that go from one page to another. You can also add links to anything on the web. This allows for a base level of interactivity. Of course, in order to do this, you’ll also need to have a PDF creation application (this is different than being able to export to PDF from your word processor).

So, as inbound marketing started to become ‘a thing’ a decade ago, it made sense to deliver eBooks and whitepapers in PDF format. Much of the content in eBooks was already created for use as printed material, so it was a simple matter of saving a lower resolution PDF for use on the web as part of a top of funnel offer. Add that to the fact that they’re easily gated so that the files can’t be found by search engines, it has always made sense to use PDFs for our premium written and graphical content. However, ease of creation from existing marketing materials isn’t a good enough reason to keep using them.

What problems are there with PDFs?

There are a number of practical issues with the PDF format and one fundamental flaw that makes it unfit for use in an inbound marketing workflow. We’ll get to the major flaw in a moment, but first, let’s look at the other problems.

Although nearly any program can export to PDF these days, most people don’t have access to actual page layout applications such as InDesign to create good looking, professional documents that fit your organization’s brand. Once a PDF has been created, it can’t easily be modified, requiring a re-export from the original source files.

Once downloaded, it can’t be updated

At Kula, one of our most popular eBooks (The Executive’s Guide to Inbound Marketing) has been downloaded thousands of times. Which is pretty great. However, once downloaded, it’s impossible for us to update the content in that document. Given how quickly business evolves, making updates to the information in an eBook is essential, but those that have already downloaded the guide have no mechanism to update it. Compare this with a web page which can be readily updated by anyone with an account in your corporate CMS (Content Management System). All future views of that page will show the most up-to-date content, unlike PDFs which remain static. Being able to quickly update a page is also important in the case of an error or omission.

When Adobe released PDF forms many years ago, it was a great way for organizations to create portable forms that could be filled out and printed or emailed. But actually retrieving the information from these forms—or better yet, syncing it to a CRM or online contacts database such as HubSpot—is nearly impossible. PDF documents are simply not ‘of the web’.

While it is possible to embed a video file in a PDF, unfortunately, it’s not a good solution. For one, embedding a video makes a PDF document significantly less portable, since the video will drive up the file size. Even more importantly, the only video format that works in PDF files is Adobe Flash, which renders the video inoperable on most mobile devices and many modern desktop web browsers.

Since a PDF file is essentially ‘offline’, there’s no way to know how many people visited the page, how much time was spent with it, or what links were clicked. Compare this to even the most basic of web pages and the difference becomes clear. Given the importance of analytics data for modern marketing and sales organizations, knowing who is engaging with your content and how they’re receiving it is of the utmost importance.

No caching or controlled downloading

With web browsers, once an asset such as an image, CSS file or font has been downloaded a single time, it is then available for use by all subsequent pages during that session and future visits.

Additionally, with a PDF, all elements need to be downloaded in a single bundle, whereas with a web property, it’s possible to structure progressive downloading, making it significantly faster for leads to access the content.

PDF files have a lower search rank than native HTML

A native format web page can readily be indexed by Google and other search engines. Although a PDF can be indexed for search, these documents are not given the same level of importance as HTML-based content in the SERPs, nor are they structured semantically to provide a common hierarchy of information.

On top of that, marketers can use the robots.txt file to control whether or not a web page gets indexed, and they can use canonical meta tags to point duplicate content back to a master file, something that is simply not possible with PDFs.

PDF files are not meant for viewing on mobile devices

This is the number one problem with PDFs as a whitepaper format. Over the past half decade or so, great strides have been made with responsive web design to craft websites so that the content adapts optimally depending on the device that is accessing it. Sites that are not accessible from mobile devices are actually demoted by search engines. And yet, PDFs are still generally designed to be viewed as if they were only going to be read on large devices or printed off for later reading. Given the proliferation of mobile-first (or mobile-only) users, to deliver your most premium content in a format that cannot be easily consumed by a third to half of your audience makes no sense at all.

So what’s the solution for modern whitepapers?

When you consider that eBooks and whitepapers often include some of an organization’s most compelling content and thought leadership, it seems a shame to bury this content in a PDF that is inaccessible to mobile users, too large to easily download and not native to the overall inbound marketing web experience. 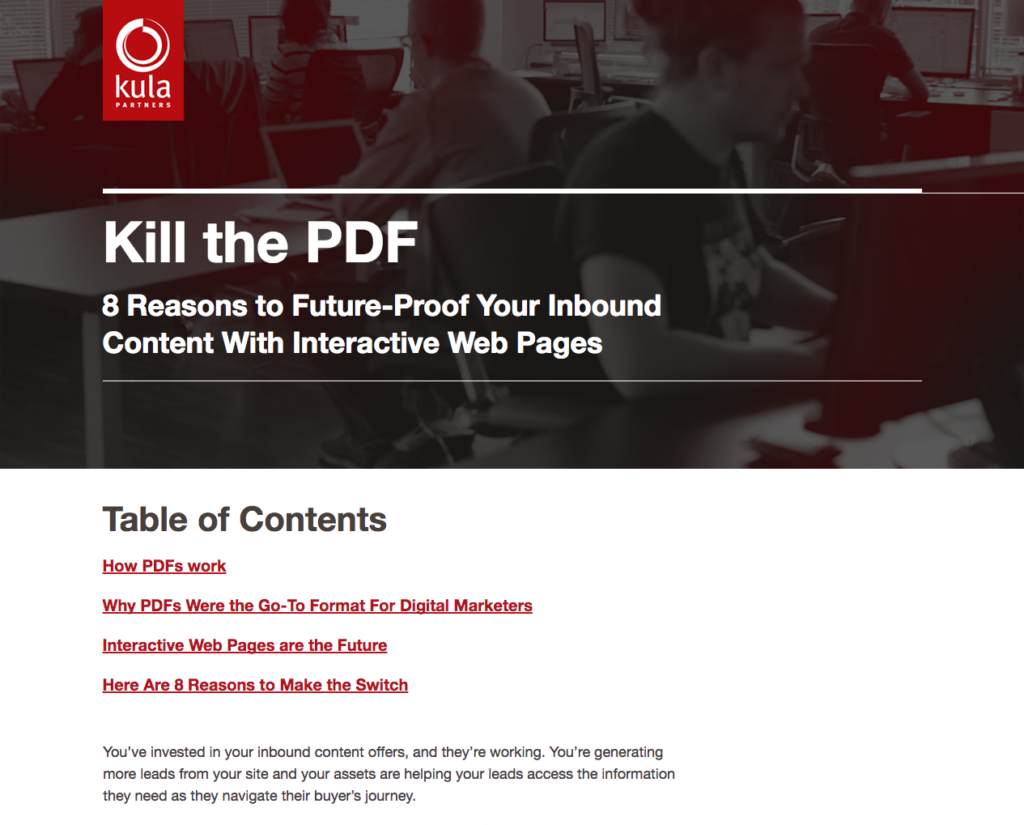 Using a custom web-based landing page to craft whitepapers will allow your organization to take advantage of interactive content and immersive elements such as video or embedded audio. Forms can be included in line, and all data can be sent to your inbound marketing platform of choice. The layout can be easily optimized to work well on all potential viewing devices, from mobile to tablet to desktop to a big screen. On top of that, ROI calculators and other highly valuable web-based applications can be integrated directly into the offer, creating a one-two punch for written and interactive content.

Whenever an update to the content is required it can be implemented with minimal cost and fuss using CMS tools most people in a marketing organization are familiar with such as HubSpot’s COS or WordPress. The choice is also yours about making the content visible to search engines, allowing you to get the search benefit of your most valuable content.

Using site data tools including Google Analytics and HubSpot, and visitor tracking tools such as VWO, you’ll garner rich and valuable analytics data about how leads are interacting with your whitepaper. This makes it easier than ever to see what’s working, so you can focus on the content that is generating the best results. On top of that, including CTAs (Calls to Action) directly within the whitepaper allows your prospects to progress further down your sales funnel, all without leaving your site.

The writing on the wall is clear. It’s time to remove our dependence on an outdated, mobile-unfriendly, poorly optimized and bloated medium like PDF in favour of a more modern content delivery mechanism that works the way your prospects expect it to. It’s time to start using the right tool for the job. Web-based whitepapers are the future of content marketing.

Get Started with the Kitoum eBook Template

We’re thrilled to announce that we’ve launched the Kitoum eBook Template—the very first of its kind—in HubSpot’s Marketplace. Kitoum makes it possible to develop custom, responsive page layouts for your content (whitepapers, eBooks, case studies and more) that can be easily read by all your visitors, from mobile-first or mobile-only visitors to traditional desktop and laptop users. Get started with the Kitoum eBook Template today! 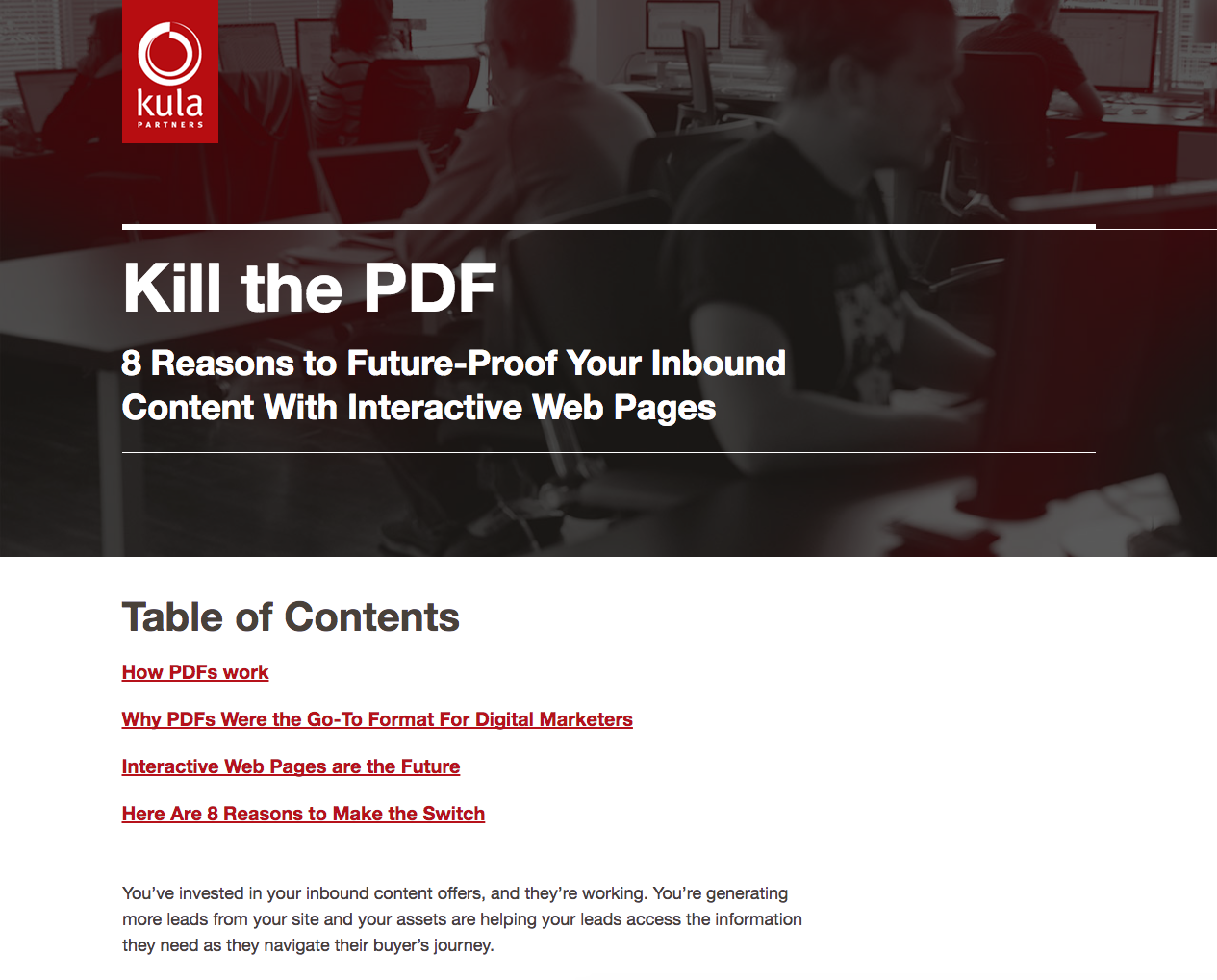 Kill the PDF: 8 Reasons to Future-Proof Your Inbound Content With Interactive Web Pages

Make your content assets work harder. Start delivering your eBooks and whitepapers as interactive web pages instead—and #KillThePDF. In this guide, we’re sharing why PDFs were a staple of inbound marketing, why they need to go for inbound marketing to move forward, and how you can start creating web-based content.