Last week, after a 30 year wait, I finally got to see my favourite band from my childhood: Iron Maiden. I bought Killers when I was 9. When they rolled through Halifax for the Powerslave tour when I was 12, my parents thought I was too young to go, and I don’t believe they ever came closer than Montreal again.

That was again the case this year, but I was finally lucky enough to be able to wrap a family vacation around the concert, so last week, I piled the family into the truckster and drove to la belle province. Of course, my wife and kids weren’t interested in the show, so off I went by myself last Wednesday to finally see the band I had wanted to see for three decades.

I don’t care about hockey, so I had no idea where the Bell Centre was (apparently, some team known as the Canadiens plays there), but as soon as I got off the Métro, I just needed to follow the slew of Iron Maiden tshirts. Literally, of every ten people I saw, at least eight of them had on shirts with the band’s famous mascot, Eddie emblazoned on the front and back. Every album cover was represented, including the best-of-compilations.

Once I got through the massive lineup (and complete and total lack of security – the Halifax Metro Centre could learn a thing or two here), and got onto the floor  to wait for the opening act, Alice Cooper, all I could do was think about the songs I’d been listening to for ages and wondering how they’d sound live with a huge backdrop of theatrics.

When Maiden finally came on, the curtains opened to reveal an incredibly simple stage setup. Yes, there were occasionally pyrotechnics and huge animatronic walking Eddies, but for the most part, the band simply changed a large screen printed curtain with the old album artwork, sans logo. The band has so much invested in this imagery that it made a lot of sense. The musicians (all in their 50s!) were incredible as insanely musical and note-perfect renditions of every song from nearly four decades of music came pouring from the speakers. 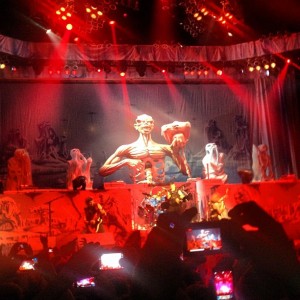 The use of the well-known artwork helped draw the faithful into the tribe and made them feel welcome and knowledgeable about Iron Maiden. The recognizable images allowed everyone in the audience to focus not on the visual, but on the band itself. I’ve been to lots of concerts in the last three decades, it’s something I make as much time for as possible, live music is a huge priority for me and never in my life have I seen an entire arena on its feet for the entire show belting out every lyric of every song. Seriously, at times, Dickinson would just stop singing and yet the voices never stopped for a moment. It filled the Bell Centre the entire time. Incredible.

Obviously, there are many reasons that people follow a corny British old-school heavy metal band: the story-telling, the duelling guitars, the showmanship. But, it’s the connection to the imagery that shouts “I’m part of this”, while letting you focus on the music. Brands should be so lucky to have this level of owned-media connectivity.

What are you doing to create memorable content that people connect to and see themselves in?